As a reward for surviving the Christmas period and not committing murder, i.e. working 60 to 70 hour weeks on her feet, in heels, in a four storey restaurant without an elevator and doing a thousand covers a day, she and the other cocktail waitresses, along with the bartenders were treated to an afternoon of go-carting, followed by drinks at a nearby pub.

Everyone met at the restaurant in Piccadilly before jumping on the tube together and making their way to North Greenwich. Upon exiting the station she saw an open space of beautiful white powder between her and the private van waiting to pick up the group. A couple of inches of snow had fallen the night before, the first decent amount for the season and it still hadn’t melted away, so she took the opportunity to start her very first snowball fight. There they all were; English, Welsh, Italian, Polish, Latvian, Russian, Spanish, Portuguese, Nepalese, Argentinian and Australian adults, both male and female, all screaming, laughing and running around, pelting the shit out of each other with ice rocks they had constructed between their gloves.

Once bruised and wet and bundled into the van, they were taken to The Raceway in Docklands where the competitiveness continued and a number of people crashed into the barriers courtesy of their delightful co-workers giving them friendly nudges. She recorded one of the slowest times on the day, but she preferred that to a case of whiplash.

Afterwards, at the pub, she continued a harmless flirtation with her Spanish “work husband” which had been simmering for a few months. He half joked she should visit his mum in Valencia with him and he would teach her the secrets to making a proper paella. She was enjoying the bar tab and exchanging stories with her colleagues when she happened to look at the time and saw it was magically 10pm. She should have been home hours earlier.

It took another hour for her to reach the front door of her basement flat in Stoke-Newington, where she heard voices coming from inside. She entered and immediately saw to her right two unfamiliar men aged in their 20’s sitting on the blue sofa in her living room. Confused and unsure what to do or say, she just stared at them until her friend visiting from Australia, popped his head around the corner from the kitchen and said hello. They had met six years earlier running in the same social circles and had once shared a cheeky kiss on his nineteenth birthday. Now, years later and on the other side of the world, he was sleeping on an inflatable mattress at hers before moving to Portugal to work in a hostel, and had decided to invite some friends he had in London over for drinks. The strangers introduced themselves to her before quickly dispersing into the night.

As soon as they were gone she began peeling off her layers of winter clothing, while simultaneously searching the kitchen cupboards for anything with an alcohol content. Her friend looked on for a few silent moments before sheepishly confessing he and his friends had drunk everything and that he would walk to the off license around the corner to get something.

Fifteen minutes later he was back with a bottle of spiced rum and a look of wonder on his face. After spending most of the day and night inside, he had just seen Stoke-Newington common, a small triangle shaped park across from where she lived, totally blanketed in snow. As they were both from a place in Australia where it never got cold enough to do so, they decided to layer back up and go build a snowman.

It was light to hold and soft to touch, like desiccated coconut. At first, it was relatively dry when it was loose, but as they consolidated it into a small hard mound, which would become the body of the snowman, it became wetter and like the ice shavings you get in a snow cone. As they knelt, knees soaked through the jeans, sculpturing their friend, she looked around. The leafless trees that lined the edge of the park closest to the train tracks looked like they were dusted with powdered sugar. The London sky was unusually clear and starry. It was nearly midnight, but the combination of the street lamps, the starlight and the snow made everything luminous.

On the other side of the common she spotted three middle aged Indian men giggling on the equipment in the fenced off playground area. She wasn’t surprised by this sight, as she had witnessed drunk Hasidic Jewish men, who lived up the road in Stamford Hill do the same thing on multiple occasions. They were all still kids at heart.

They had finished rolling the head of the snowman and had placed it on the body only to realise they had nothing to use for the eyes and nose. At that moment they heard the gate to the playground area bang shut and saw the three Indian men walking straight towards them. She was suddenly frozen, both in terror and temperature. She saw one of the men reach into his jacket pocket, for what she could only imagine was a knife. This is it she thought. They were about to get fucking stabbed while building a snowman.

“Do you guys need a carrot for that?” the man inquired, as he pulled not one, but TWO out from the pocket his hand was stuffed in. It was one of the most surreal moments of her life. She breathed a heavy sigh of relief and accepted the vegetables, which were broken up to make the finishing touches to their work of art.

It turned out the trio had originally ventured to the park with the same idea as them, which explained the carrots, but they had been quickly enticed by the swings. After a short conversation and once everyone had a photo with the completed snowman, the pair were invited back to the Indians’ flat for some late night curry. She politely declined on behalf of her and her friend, as she thought it was a generous, but also weird offer. They were also about to catch pneumonia any second. They thanked the men for their assistance and walked back to the flat where they had a nightcap of spiced rum and went to bed.

The following morning she went back to investigate if the snowman had survived. Half the snow had disappeared across the park, exposing wet green patches of grass. The snowman had reduced to a third of its size, and she could tell some animal, most likely a fox or a crow had stolen some of the pieces of carrot. She gazed up and saw one of the Indian men walking past on the footpath waving at her. She smiled and waved back. 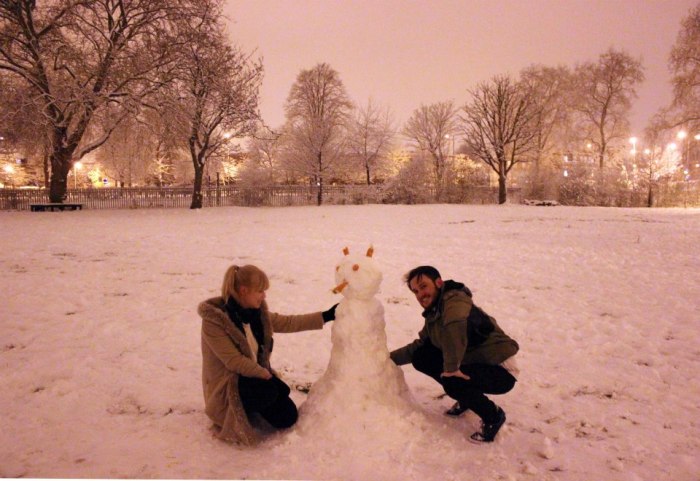